Ominous Images That Stir the Imagination.... 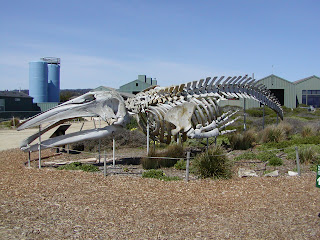 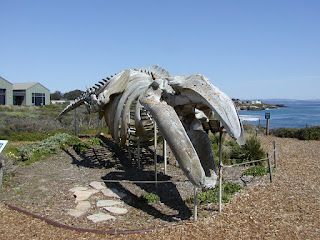 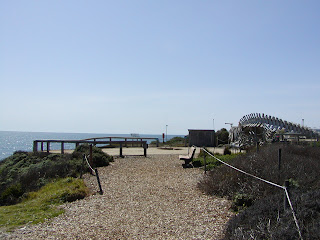 I took these photos at the Long Marine Lab located on the campus of the University of Santa Cruz.  All of them are of a young Gray Whale skeleton that is 25 feet long and is obviously outdoors.  The creature has been put up on metal pipes to keep it off the ground and give it that more caught in the moment feel.  As you can see in photo #3 it has been placed next to a path and a mere 20-30 feet from a fence that allows visitors to look over a cliff and out at the ocean.  The view there is breathtaking and can really inspire a person's imagination.

In my case it inspired a terrifying scene for my second novel where a young female reporter has been snooping into matters regarding  Cassandra Elliott (billionaire heiress) and her lover Julie DeLuca-Cloudfoot (shamaness and internet erotic lesbian wrestler) my two leading characters for this novel.   They have been stalked by a strange figure wearing clothing straight out of the late 18th century.  He appeared in my first book "THE BRIDGE", where he nearly captured Cassandra at one point.  The mystery man failed and managed to survive being shot several times (including int he face), and was later at the center in a fiery explosion that took out an entire structure.  Cassie and Julie thought he had been killed and are completely unaware he is still around.

He  has plans for Cassandra and has followed her here to Santa Cruz, while she is on vacation.  He cares nothing about Julie, she is just a nuisance who may need to be eliminated if she tries to interfere and protect her lover.  His plans involve only the heiress, but the moment has not come and he must keep her safe in the meantime.   But, a new threat has arisen and he must keep Cassandra safe without her knowledge.

Unfortunately, a female paparazzi has been making a nuisance of herself while pursuing Cassandra and Julie to get photos and juicy details about the couple.  Her goal is to out the heiress unless offered a good sum of money to let her stay in the closet.  But now the reporter has just run across the mysterious figure and plans on making him part of the story.  It is a fatal mistake.  For although the he appears to be alone, he has an inhuman ally with him.  His compatriot proceeds to animate the giant skeleton as if it were alive once more.  The young would-be paparazzi will be grabbed by the bony jaws tossed about and eventually flung over the railing you see in photo #3.

How this idea came to me was interesting.  I had visited the Long Marine Lab before and had simply wanted to look at the view from the fenced area.  I heard a creaking behind me for a panicked moment my imagination went wild.  I pictured in my mind the great skeleton just behind me had moved and the pipes holding it up were being bent in the process.  Looking around I quickly saw that this was not the case.  You see right nearby is a large Desalinization Plant and the metal noises were coming from there.  But still the image stuck in my mind and I filed it away for later use.  It was too good a scene to let go.  Now I've finally gotten the chance to use it.

So now you have an example of how just simply roaming around and checking out places, can lead to some interesting ideas for writing.  I hope you enjoyed this little view into my world.  Please leave a comment and let me know if you'd like to read more about how I get other ideas and inspirations.  Until next time, take care and thanks for reading.

NOTE: If you read my other blog, you'll find this entry duplicated.  I felt it held information that would be of interest for both sets of readers.  I'll be posting more about writing here shortly.  Thank you.
author characters death fiction writing agent publishing literature creative inspiration mystery mystery paranormal horror novel original story scene setting