Riding The Waves To Inspiration... 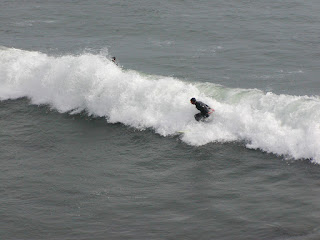 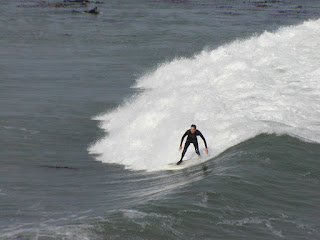 Shortly after coming to live here in Santa Cruz I began frequenting the cliff area overlooking the bay.  It seemed everywhere I went along these cliffs I would see surfers riding the waves.  As I watched I began taking notice of how they would paddle out and sit and wait for a wave to come.  As one approached I noted they turned their boards around.  Then as the wave raised the back end of the board, the rider would press down in the front and once momentum was established they'd lean back and stand up.
I found this hypothesis fascinating and consulted one or two of the veteran surfers nearby to confirm my suspicions.  And they were more than happy to congratulate me on my observations.  I was indeed right and would I be interested in joining a class and taking lessons.

Unfortunately, I wasn't ready at  that time, nor am I now.  But it is something I'd like to try when I can afford it.   And as I've said in earlier posts, I like to write from life experiences.  Whether they be my own or from someone close to me who doesn't mind my using their experience for a novel.

In this case, just watching the surfers helped to stimulate my imagination.  Watching one occasionally 'wipe-out' being flung up in the air and landing back in the water gave me an idea.  What if that happened to someone who didn't lose control, but had their board hit from underneath?  But by what?  A shark?  No, done too many times already.  Same thing for an Orca or other typical marine creature.   None of them would do.  But what about a new creature, something sinister and unreal.  This prompted me to think back to some of the classic writers like H. P. Lovecraft (one of my heroes and all-time favorite authors).  He created wondrous beings from out of time and space, some of whom lived beneath the waves.  But I didn't want to borrow his creations, I wanted my own.  Eventually I came up with creatures and where they came from.
I would use a surfer getting knocked off their board and having a near miss with the strange being and getting the briefest glimpse of the creature.  Of course no one would believe them.  The accident would be attributed to a near-miss with a shark, though as she would point out "Did any of you see a fin in the water?"  To which everyone would shake their heads but stick to the normal and most likely explanation.   Eventually local marine life would be found dead along the shore, killed in strange and unusual manners.  Only my surfer would know that there was something 'unnatural' behind it.  And to make matters worse, it was now aware of her.

So just because of a morning stroll along the water I had come up with an entire story-line.  It has become the basis for my second novel "THE SHIP" which is more than halfway finished.  I hope to have a completed 1st draft by the end of this month.

Now some of you may be wondering, why did he choose to make an entry like this?  Simple, I wanted to demonstrate again how we can find ideas and inspirations for story-lines when we least expect it.  How just a daily stroll can start the mind working and turning out ideas.   Go places, do things, see what suddenly catches your imagination and starts a train of ideas.  You may surprise yourself.
author creation H. P. Lovecraft horror ideas imagination inspiration mystery mythos novel ocean paranormal surfing terror writing