My Review of HP Lovecraft's "At The Mountains Of Madness"....

By Allan Krummenacker - June 01, 2014
Sometimes its good to check out the classics from way back when.  HP Lovecraft was an author who lived in the early 1900's and is considered by many to be one of the greatest horror writers in history.  His creations ranged from magical (such as warlocks,  and demonic beings) to creatures from outer space who are so 'alien' most do not even conform to any life forms we've seen on this world.

But his greatest talent was inspiring terror in the readers by letting them meet these nightmarish things through the eyes of ordinary people like you and me.  We see and feel their terror at meeting things that are so different and (mostly malevolent) that seem to defy the laws of God and man.

Here is my review of one of his collected works.  I may do reviews on some individual stories of his down the road because they are so long that they border on novellas.

So without further ado... Here is my review of "At The Mountains Of Madness".... 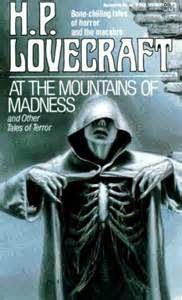 An archaeological expedition into the frozen wastelands of the Antarctic leads to an amazing discovery of strange fossils that seem reminiscent of legendary creatures whispered in the dark pages of the Necronomicon. Soon actual specimens are uncovered in pristine condition but a freak snowstorm blows down the sides of the mountains cutting off the members of the expedition that found them from the rest of their team. Silence follows and a rescue mission is sent out to see what happened at the camp and what has become of the treasured find.
But only horror awaits the rescuers as the camp is found to have been wiped out in the most bizarre and horrid fashion, with one of the camp's men missing along with a couple of the sleds. As the search expands more and more questions arise and a trip to the fabulous mountain range reveals a terrifying secret. One that will drive one man mad and leave another shaken as the tries to reconcile himself to the knowledge of how life evolved on our world and what was behind it.
This and other tales of the macabre await the reader, as Mr. Lovecraft weaves tale after tale of horror and madness.
"At The Mountains Of Madness" is one of those tales by the great man that border on science fiction as well as horror. The entities that appear in the story come from the stars and are truly alien and frightening to imagine. His creations were truly not of this world in my opinion. These creatures are not humanoids with funky foreheads as depicted in so many movies or on television.
Perhaps he should be considered among the earliest of science fiction writers as well as horror.

*To read more of my reviews on Goodreads.com click on the link below: