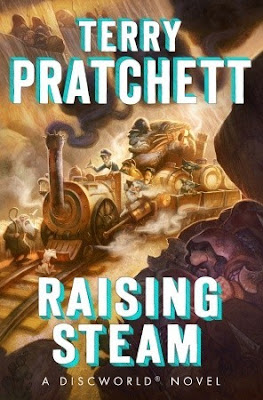 Mr. Pratchett's latest offering to us is a wonderful read, in my opinion. I've seen other reviews where people lamented that his declining health was clearly showing in this book saying things like "it wasn't as funny..." or "...it felt like this was his farewell to the fans..." etc. A lot of this is understandable considering the rare form of alzheimer's he is fighting. But for me, this book felt more like a wonderfully wild ride that took us to various parts of the Discworld, just as the invention of the first train in Ankh-Morpork intended.

Pratchett uses the invention of the first steam engine to take us all over and reintroduce us to a number of old and familiar faces and places. We go back to Uberwald to visit Lady Margolotta, The Low King of the Dwarves, Bonk, the goblins, Harry King "King of the Golden River" (a river you would not want to swim in by the way folks), Commander Vimes and the Watch, Death, Lord Vetinari, and of course the incorrigible scoundrel of the piece Moist Von Lipwig.

We get to see some of these wonderful characters interacting with each other in various ways, some for the first time like Lipwig (the "reformed" con-man) working with Stoneface Vimes. Mr. Pratchett has been modernizing his world little by little throughout the series introducing the "Clacks" for communicating quickly over great distances, the first newspapers (spreading information to not just the gentry, but the common man), a new monetary system that is not based on the gold, so the addition of the steam engine seemed quite appropriate. With each book he brings his scattered characters closer to one another, while still providing a fun-filled thrilling ride along the way.