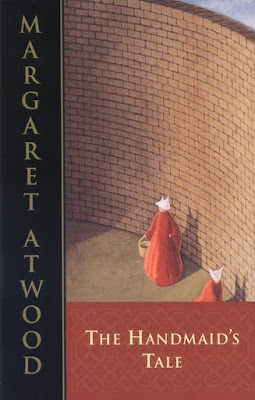 I’m starting this book review with the book still unfinished. It’s the kind of book that you think about a lot while reading it, even as you itch to turn the pages again. I can’t compare it to the movie or TV show, as I wanted to read it rather than watch it. I would advise this, although the adaptations may be excellent. The voice of the narrator is crucial.

The voice of the narrator is crucial to the story’s style. We begin, a little scared, a little confused, picking up meaning from tiny details-- because that is what she can give us. Her voice becomes clearer, gradually, as she moves farther from the drugging and brainwashing and has time to rebuild her story and factor in the new things. But even ¾ of the way through, I still don’t know what goes on in the colonies that has her worried about being sent there, or what the real fate of Unwomen is. Sometimes, it sounds like she’s afraid of being executed and sometimes it sounds like there is something worse in store for her. The people in charge probably like to keep everyone uncertain, because it makes them more pliable.

The voice of the narrator is also an important part of the story itself. There are many women in this story, but the narrator’s story is very much hers, very personal. She finds joy in little things, and fear in them as well. She was left with a pillow that has Faith embroidered on it, but reading is forbidden to women… so she stands, when she finds the pillow, reading that one word over and over, enjoying breaking one of the stupid rules, but wondering if she will be held responsible for a pillow she did not choose. Internal moments like that are a tremendous part of the narrative, and they make the dystopia seem far more real than an external storytelling would.

One thing that is difficult in reading it is that she speaks in the present tense even when recounting dreams and memories. We don’t always know what is real until we have read enough to place it in her timeline. But this reflects her own struggle to handle it all. Her memories, her reality, her hopes and fears jumble together when she is left to sit alone for hours with nothing to do.

If you aren’t familiar with the concept, the story takes place in a near future time when theocrats take over. There are wars and perhaps disasters as well that have left the majority of people unable to create healthy children. The narrator had a healthy child, before the theocrats took over but after some of the pollution events, and so she is seen as proven fertile, and eligible for status as a Handmaid, a caste of women who are, in theory, to be honored for trying to keep humanity alive by acting as breeding vessels, but are in fact despised for having a life defined by their sexual potential. They are circulated in assignments among the elite, and if they give any of the Commanders a healthy child, they will have a future. If they do not, at a certain age or after a period of time, they are removed from Handmaid status and death or exile seem to be their fate.

This is part of a larger theocratic totalitarian state, but the Handmaids are important not only because this is the story of one, but also, I must say, Gilead (the state they are in) is both correct to be desperately trying to make more citizens and at the same time, doomed by its methods. The rules controlling the Handmaids, the infertile Wives, and the men of all ranks, makes it less likely there will be successful offspring. Cheating leads to death (and I suspect some Handmaids are trapped into it by angry Wives), but the Commanders often are sterile. The atmosphere of fear and mistrust seems unconducive to reproduction. At best, stress hormones aren’t great for a pregnancy, while at worst, the people are actively undermining the possibility. If Gilead really wants babies, it should make procreation fun and free rather than coercive, but the people in charge want to control everything more than they really want another generation.

* * *
Now that I’ve finished the book, I’m finding myself surprised by some things I heard in the past. I have to wonder if people saying, “Serena Joy was worse than the Commander” were talking about the movie, because my feeling about her in the book is quite different. She was unhappy and oppressed as well, and sometimes showed some genuine kindness in spite of her general jealousy. Even when she had something specific to be jealous about, she didn’t want the Handmaid destroyed-- she alone had the nerve to make a slight protest when the narrator was led away.

The ending, I won’t say exactly what it was, but this book manages to pull a The Lady or the Tiger end which I look at from the optimistic perspective, finding it more in keeping with the way I interpreted a couple of characters. It certainly gave more room for optimism than 1984 or Brave New World, mostly within the personal story, but also, I believe that Gilead is doomed/ They have no real ability to convince the people they are oppressing that their regime is the best thing around. They have only existed for a few years and already they are riddled with corruption, resistance, hypocrisy, inconsistency, poverty, and a death rate much higher than the birthrate. Either the regime will be pulled down or it will collapse under its own failure to work with human nature.

I wonder if the people who found the book more depressing than I did mostly identified with the narrator more. I don’t say she was difficult to identify with. Actually, she’s a fairly normal woman. I’m just not normal, and found myself more drawn to side characters. I also kept thinking that in that world, I would have been sent to the Colonies (forced labor areas), if I wasn’t killed outright,  and wanted to know more about life there.