Book Review: Kerry Greenwood's "Away With the Fairies" 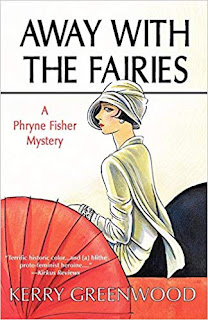 This is one of the Phryne Fisher novels, a mystery set in Australia. These deal not only with solving crimes-- in this case, looking into the suspicious death of an eccentric writer of fairy stories-- but also the social structures of the times they are set in. It’s 1928, and the aftermath of the Great War is still felt in everything from the growth of women’s career options to international politics. For Miss Fisher, the international politics has turned her personal life on end, because her Chinese boyfriend is in danger just trying to handle his family’s import business while China is in crisis. As for the mystery, most of the suspects living as neighbors to the deceased were also her co-workers through a women’s magazine. And what a women’s magazine it is! While there are columns on child-raising and fashion, the magazine is full of how-to information on building your own radio and fixing your car, as well as health and gardening advice.

The editor is a feminist and sees her magazine as a means of changing the world, by making it so that people see achievement as not merely for extraordinary women, but every woman. I found this an important take because in the history of feminism, there was a split after winning the vote between women who wanted to focus on opening opportunities for extraordinary women (what I think led to the idea of “white feminism” being about leadership and opportunity for women of the privileged classes) and women who wanted to focus on helping the most vulnerable women (immigrants, working class, etc.). By making a magazine that intended to lift up women regardless of background, giving them skills that would save money and show them as competent and capable, the editor was, in essence, trying for a middle ground that would move all women forward.

Phryne is sympathetic and joins in with the magazine, filling in for their fashion writer who is away. While Miss Fisher is wealthy now, her background was quite different and she has a refreshingly practical approach to get maximum wear and versatility with minimal outlay, with a bonus column on remaking vintage clothing into couture to get a special occasion look at thrift store pricing. While her work on the articles is mostly a way to gain access to the suspects and a minor part of a plot involving assassination attempts, pirates, and the search for a motive, it tells us about Phryne’s character-- how she can turn a chance encounter with a friend into an opportunity to create a win-win scenario; how a cover ‘job’ is attended to with the diligence appropriate for someone seeking a career; and how her respect for Dot gives her even more insight into the needs of the everywoman than her own life experience can.

True to the concept expressed in the magazine, the writer uses the novel to give us not merely the extraordinary Miss Fisher, Bunty, and other seekers of adventure, but the quiet strength and leadership of the magazine editor and the matriarch of the Lin family, the single-mindedness of a passionate photographer who will spend hours to get the perfect shot and work for plates, and the wholesome determination of Dot, or a widowed mother, or prodigal niece who combine their labor with principle. There is something to admire in most of the women, and while there are a few who are more notable for folly in the end, there is hope (except in the case of the deceased) that they will learn from their mistakes and come out better and happier for it.

This is the first I have read of the Miss Fisher books, although I’ve enjoyed the TV series. As usual, books give so much more wealth of detail and the opportunity for greater depth. Kerry Greenwood takes the time to delve into history and social themes, grounding them in reality (piracy is organized crime, not merry mischief) and weaving them together from separate plot strands, as when she links post-trauma reaction to mutilation and betrayal in different circumstances. While the novels can be enjoyed on a superficial level of escape into a distant time with a flamboyant heroine pursuing justice, I think most readers will find satisfaction in the sense that they have learned a little, thought a little, and been given an opportunity to see ways to live well.