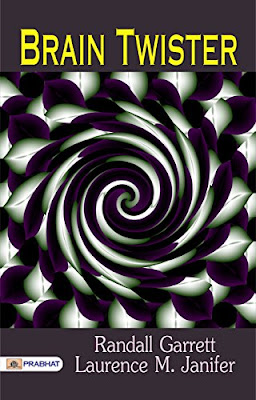 Review by Helen Krummenacker
This book was copyrighted in 1962, which explains why it reads like a very old-fashioned, Cold War Era story on one hand, with the language of the era, and yet has elements that would be futuristic by today’s standards. It also predates the period where writers decided longer is better-- it’s decidedly light on padding and has a crispness to the language. Overall, it reads like a Young Adult novel, not demanding much of the reader but imagination and a bit of tolerance for mild sexism and ablism.

The writers, Randall Garrett and Lawrence Janifer, give us an FBI agent assigned a seemingly impossible case: there is a spy working, presumably for the Russians, to ferret out what is happening with a project for a new kind of space drive. The reason that catching the spy may be impossible is that the spy is a telepath. By coincidence, a second research project at the same facility had been studying telepathy and developed the means to determine when someone was having their mind read-- but they had no ability to determine who or where the mind-reader was. Their own telepath passed away before they could try to use him to find the enemy telepath-- and it is doubtful he could have, as he had intellectual impairment.

So the FBI seeks more telepaths, and they start to find them, every single one institutionalized for mental illness. Not because they seem crazy to people who don’t know they are mind-readers, but rather because the presence of other minds speaking to them all the time has made it difficult to develop a stable sense of self. In fact, the most coherent and helpful of the is perfectly sane except for her believe that she is Queen Elizabeth I, a delusion that worked to give her a strong core identity and manage the voices.

It’s quirky and amusing, and a rather fast read (I read it over the course of two one hour lunch breaks). It isn’t going to change your life, but if you like sci-fi crime/spy novels, it holds together with internal consistency, a quick pace, and fun imagery.
#bookreview #telepaths FBI Helen Krummenacker intrigue Lawrence Janifer Randall Garrett spy