Our First Big News For 2021: "Forever Haunted" Is Now Available on Audible

By Allan Krummenacker - March 05, 2021
Sorry for the long delay in posting here, but as you're about to find out we've been VERY busy. 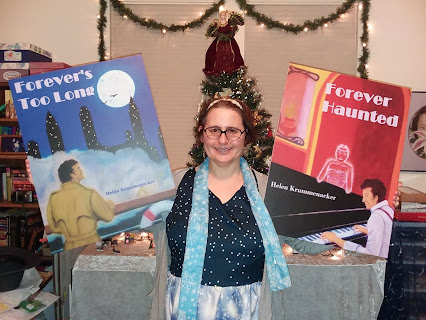 First off I am proud to announce Helen's 2nd solo book "Forever Haunted" is now live on audio at both Audible and Amazon for just $17.46 or 1 Audible Credit.
Once again I am the voice of her main character Rafael Jones (along with every other character). This is my 2nd full audiobook narration and I'm thrilled to help bring her characters to life once more. And yes I am still "Chief, Cook, and Bottlewasher" for the audio. The recording and editing process took longer than I'd hoped, but I learned some new tricks (through trial and error) that I will be sharing with you all in future posts. I've gotten things down to a checklist I keep on hand for myself of how to edit the audios for pacing speed, volume, pauses, etc. which I did not do the first time when I recorded "Forever's Too Long".  And with the amount of time that passed between that audiobook and this one, I forgot a lot of editing techniques/tricks that I had to relearn and change.
Again, I will be sharing a number of those tips and tricks with you in the very near future.  In the meantime here is some more about the new Audiobook:
Bookcover Blurb:
Life isn’t easy, but it’s easier than adjusting to being dead. Rafael Jones is still learning about his new diet, powers, and limitations when he’s asked to certify that a house isn’t haunted. But when it turns out to have the ghost of a murdered flapper, his new mission is to locate the missing gangster who killed her, the magic mirror that helped the killer disappear, protect his client, and stop a new string of murders.
Magic and mystery collide in the summer of 1947, and our detective is digging up answers to questions going back as far as the end of WWI.
Amazon Link:
https://www.amazon.com/Forever-Haunted-Detective-Book/dp/B08XZRC84S/ref=tmm_aud_swatch_0?_encoding=UTF8&qid=&sr=
Audible Link:
https://www.audible.com/pd/Forever-Haunted-Audiobook/B08XZQ7TCW?qid=1614960342&sr=1-2&ref=a_search_c3_lProduct_1_2&pf_rd_p=83218cca-c308-412f-bfcf-90198b687a2f&pf_rd_r=YVXHJPM2ZE3PDSTE3395I'm
And of course, here is an audio sample:
In addition to getting "Forever Haunted" edited and sent to Audible, I have already begun recording her the third book in her ever-growing series, titled "Forever in Deep" 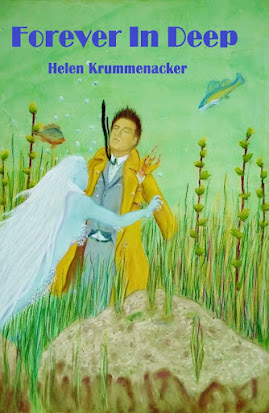 I'm pleased to say I'm already about 1/3rd of the way through with the recordings, and most of it is already edited. Lord, am I so glad I wrote down those editing notes to myself, it goes much quicker now, but that's something that comes with experience.
I've also been busy with getting the 2nd draft of "The Pass" (my collaboration with Rich Caminiti) to the final stages. I have only to insert a few scenes into it, and that will be going out to beta-readers for inspection and comments. Once we've heard back from them, we will begin the 3rd and final draft, with hopes for an October release later this year.
"But what about the Para-Earths Series?" I hear some of you ask. Well, work has been continuing on both "The Door" and "The Vampyre Blogs - Family Ties".  Admittedly, the work has been slow on both of them, but they are still happening. I'm also in the process of getting some of the completed novels prepared for audio recording so they can join the ranks of Audible. But of course, everything takes time and there are only so many hours in the day. And of course with m Fibromyalgia, I have only so many "spoons" to work with in a day. So I ask that you all please be patient. I might be recruiting a couple of more voices for the Para-Earth books to make them more of an ensemble cast recording, but we'll see.
Anyway, that's why I've been so slack on getting new postings up. The narrator work takes a lot of time and energy, but I have already been approached more than once about voiceover work for other people, which would be paying jobs for me. Which would be most welcome. I do hope that my audio narrations will lead to bigger things like some voiceover work for animations, podcasts, or streaming series. One never knows. But time will tell.
And now I must get back to writing and recording. So until next time, which I promise won't be too long, stay safe and keep recording and writing my friends.
#Audible #author #collaboration #detective #editing #link #narrator #sample #voiceover