In my last entry I explained how I had settled on the idea of Parallel Realities for the premise of the series.  But what could I do with it that was new and different? Well as Doctor Who would say, "This is where things get a bit tricky."

We all know that a lot of choices are man-made, but events are also a major player in our world and our lives.  There's an old school of thought that says, for whatever choices we make another alternate timeline exists where a version of ourselves exists who follows the path not taken.  I began pondering this concept and asked myself, "What if not just choice could lead to a parallel reality?  What if events that didn’t happen in our reality, did happen in another reality?  And what might be the consequences and effects of that event?"  This idea really intrigued me and I began to think about the concept on a much LARGER and OLDER scale...

Current theory says that that moon we all know and love was made as a result of an event that took place in Earth’s very early childhood, long before the first dinosaurs or any life-forms evolved.  At the time our planet was much bigger than we know it to be now and it was hot and molten.  Then another planet called Thea crashed into our world and literally knocked the stuffing out of us.  Debris was scattered into space and floated there for centuries while the two worlds slowly fused into the size and shape we know now.  As for the debris, caught in the new Earth’s gravity it circled around our world and slowly coalesced and formed the moon we all know and love.  This also explains why moon rocks brought back by our visits showed the same compositions as are found here on Earth.
​​
With this thought in mind, suddenly all the beings and entities I had been thinking about writing suddenly became more real to me.  They weren’t aliens from other worlds, or magical demons from other dimensions, they were Earth beings.  Just not from this reality.  They came from alternate Earths where either the creation of the moon or some other kind of cosmic event (an asteroid that missed us in this reality, actually struck and brought some microbes, or some other kind of calamity) changed that other Earth’s development which in turn altered what kind of life might or might not evolve.  I quickly realized that the possibilities were endless and that I wouldn’t have to limit myself to just one alternate version of Earth.  I’d have dozens or hundreds available for storylines…  In that moment I came up with the phrase Para-Earths.
​​
Of course this led to new questions from Helen such as how do these beings slip out of their versions of Earth and into ours?  Do people from our Earth wind up slipping into those alternate earths?  Are the beings from these Para-Earths malevolent, friendly, or simply following basic instinct like herbivores and carnivores, etc.
As for the how they manage to intrude into our reality I proposed thinking of reality as a tree with loads of branches.  If you actually look closely you will find that branches of course give birth to new branches and in turn to the same, and so on.  Yet a number of these branches will rub up against each other at one time or another.
​​
Now if you picture Earth as we know it to be one branch, and one of those Para-Earths as another branch, they too can brush up against each other and a doorway opens between the two.  In my writings, this is a naturally occurring phenomenon that occurs every so often.  The reason no one notices is that it doesn’t always happen when someone’s around to see it, from either this Earth or the Para-Earth that is brushing up against us.  Sort of like the old “If a tree falls down in the woods and no one is there to hear it, does it make a noise?” concept.  Even though no one witnessed it, the event happens.  But occasionally someone is there and they see something strange in the woods or out of the corner of their eye.  However, the timing of the opening can be short or long so by the time that person who saw something out of the corner of their eye can turn to focus on what caught their attention the event is already over.  Other times, they stare and stare, or maybe they walk towards it and suddenly the doorway closes and they’re left wondering if they need glasses or to stop drinking.
Our first two stories (“The Bridge” and “The Ship”) focused on two occasions when many years ago two openings lasted long enough for strange beings from two different Para-Earths entered our world and got stuck here.
​​
​​
The third book of the Para-Earth Series, called “The Vampyre Blogs – Coming Home”, wound up becoming the first Young Adult (or Y A) novel of the series. Originally it was planned to be simply a continuation the overall series, but early readers pointed out that two of the main characters were teenagers and did a majority of the storytelling. So Helen and I decided to make "The Vampyre Blogs", and any future installments a Y A branch of the Para-Earth Series. 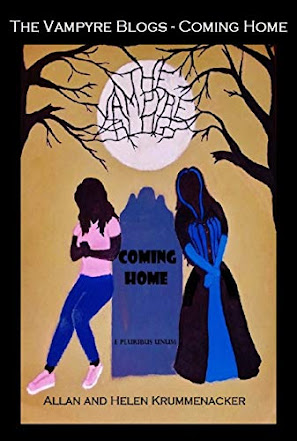 In this novel, we decided to focus on a man from our Earth being the one who briefly landed in a Para-Earth reality, and the consequences of his encountering a particular type of life form that would forever change his existence, even after he returned to his own world.
Thanks to the introduction of the characters from "The Vampyre Blogs" we were able to create an anthology of short stories in "The Vampyre Blogs - One Day At a Time". 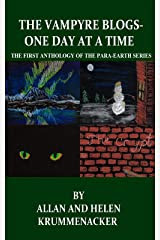 As the name implies, the stories focus mostly on the characters from "The Vampyre Blogs - Coming Home." However, it also allowed us to bring in some familiar faces from "The Bridge" and "The Ship", cementing the idea that both series do take place in the same reality. This anthology, also allowed us to lay the groundwork for new recurring characters that would appear in future installments of both the regular series and the YA books.
Of course there are many more stories to come.  Helen and I are currently working on a second anthology that will still mainly focuses on characters from "The Vampyre Blogs", but will also feature characters from "The Bridge" and "The Ship".  The collection is currently titled "The Vampyre Blogs - Two For the Road".
As for plans of any major crossover where all the main characters from both sides of the series come together, we're pleased to say there is one currently being developed.
In the meantime, Helen and I hope you enjoy the stories we’ve already put before you.  Let each tale open your imagination and fill it with wonder.  There are rules and science behind a lot of the lifeforms you will encounter in these books, and we will do our best to explain them.  In fact, we will be eventually adding another section to the blog called "Encyclopedia Para-Earth" or something along those lines where Helen will go into the science aspects of our series, exploring certain creatures we use and their real-life counterparts from the real world.
We'd also like you all to keep in mind that not every Para-Earth being we introduce to you and our characters will be hostile. Some are simply strangers in a strange world, and just because their appearance may be monstrous, does not mean they are.  In some cases, you may find yourselves being introduced to lifeforms that have become the stuff of legends in our reality.   So strap in and join the adventure, you never know who or what you might meet along the way.
Until next time, keep writing!

You can find our books (with the exception of "The Bridge" which is still being reworked but will return soon) at these online stores:
Amazon.com
AmazonUK
AmazonCA
Barnes and Noble
Smashwords
Kobo
APPLE BOOKS
#alternaterealities #books #branches #choices #dreams #fantasy #HelenKrummenacker #mystery #Para-Earths #scifi #series #surprises