It's been a while since I did a book review so I'd say we're do for a new one. Right? Well even if you said no, this post is going to be a book review anyway, especially since the book in question is by an author I've long heard about and was a huge influence on HP Lovecraft (one of my favorite authors of all time).

Now some of you may have already figured out who I'm talking about, but for those who haven't caught on, I'm referring to Lord Dunsany (better known by friends and family as Edward Plunkett, the 18th Baron of Dunsany).

Now as I said before, I've heard of Lord Dunsany from my collection of HP Lovecraft books which often reference his lordship as having a big influence on the creator of the Cthulhu Mythos. And I'd been rather interested in trying some of his work for some time. However, I'm one of those readers who likes shall we say... a sampling of an author's work before committing myself to a full novel. So, I read a lot of collections and anthologies by various authors and choose who I want to read more of from there. In fact, that was how I discovered Mr. Lovecraft.
Well last year for Halloween, Helen and I were exchanging Trick or Treat bags. Due to the pandemic we decided to fill a bag for each other at Halloween with odds and ends with a creepy/spooky themes. We don't have kids but have always loved decorating for the holiday and giving goodies out to trick or treaters. Plus we love costuming and have hit more than our fair share of conventions over the years. So we started this little tradition between ourselves to keep Halloween special for each other.
Well, one of the things I found in my bag was of course this little treasure: 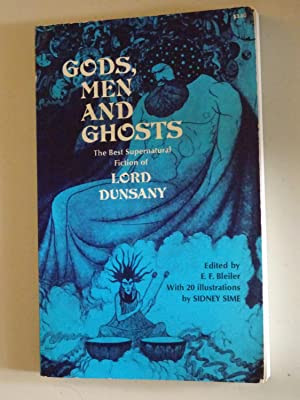 After thanking her profusely (and affectionately) I dove right in and discovered I had gotten quite a wonderful treat indeed.
The collection is broken up into 4 sections: Men, Heroes and Wonders, Jorkens and Gods. Each tale quickly grabbed my attention and I was fascinated in his lordship's storytelling style. Whether the setting be in the author's sense of modern day (late 1800's early 1900's) or a far distant time, he sets the stage in such an easy manner that the reader can imagine the setting and the characters in beautiful detail.
His tales can be curious, entertaining (especially the Jorkens' stories), mystical, or unnerving. But each one is original in its own right, even when dealing with a familiar theme like spirits and hauntings. In one tale titled simply "The Ghosts" he spins a yarn that at first seems very familiar then adds an brand new element I'd never seen used in any ghost story that took the tale to a whole new level for me. "
"Thirteen at Table" was another spirit-related tale that also took a turn I had not seen coming, with delightful results.
His lordship also creates wondrous places such as the beautiful yet doomed Bethmoora, or Yann and other fascinating destinations in which the readers of Mr. Lovecraft can clearly see the influence of Lord Dunsany on the latter.
Then there are the Jorkens Tales, which focus on that one chap you meet in a club or a bar, who always seems to have the most unusual stories to tell you that he insists are true, and you can't help but wonder if he's not right.
And of course there are the tales of the gods and the creation and end of men and worlds, each told with such lush detail that the reader can feel a little sad at the end.
This volume also contains some beautiful artwork by Lord Dunsany's collaborator Sidney Sime who's talents well compliment his lordship's stories.
A must read for fans of Lovecraft and August Derleth.