A Kirkus Review of "Forever's Too Long"

By Helen Krummenacker - January 05, 2023
What a way to start a brand new the year! Helen just got a Kirkus Review of her first novel "Forever's Too Long", calling it...
"A tense, thrilling paranormal adventure with a striking cast." 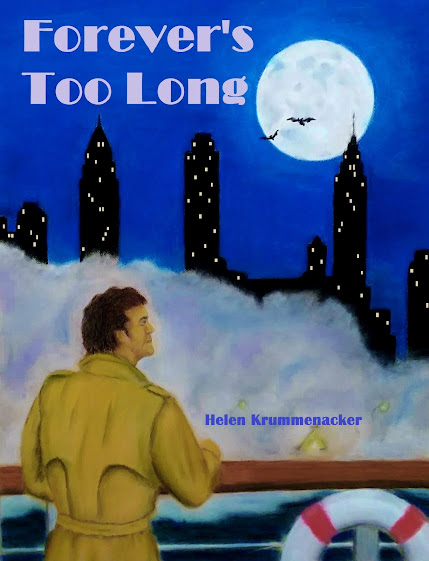 A supernatural crime novel set in the 1940s focuses on a private detective.
This series opener begins in 1947. The narrator of the story, Rafael Jones, has set up shop as a private investigator in New York City. Rafael has an extensive background in law enforcement (both civilian and military), and he is eager to strike out on his own. No sooner has he put the sign up for Harmony Investigations than he is approached by a British woman named Clara Thomas. Clara has been sent to persuade Rafael to work for Interpol. She is a sharp woman, with a degree in mathematics from Oxford, who knows how to handle herself in a fight. She can also fly a plane. Rafael doesn’t need that much convincing, and he soon learns that working with Clara will be fun. It isn’t long before the two become more than mere colleagues. The duo starts working on a case involving stolen Russian art and other valuables. To complicate matters, a number of bodies seem to be connected to the thefts. Rafael must also cater to an old acquaintance: a wealthy playboy, inventor, and industrialist named Eugene Marshall, who lives and works in the Empire State Building. Eugene is concerned with the recent resignation of two of his employees who have joined a cult known as the Order of Repentance. When Rafael investigates the organization, he runs into much more trouble than he bargained for. Thanks to the infamous Rasputin, Rafael winds up meeting a vampire.
As Krummenacker’s engaging caper unfolds, readers are kept in a regular state of suspense. While it may initially seem as though Clara and Rafael will embark on a quirky investigation together, things take a turn when the Order of Repentance enters the picture. A tale supposedly about a missing Fabergé egg and some flustered shop owners eventually begins heading down an invitingly dark, supernatural avenue. Even a cool customer like Rafael couldn’t have planned for the hurdles he faces. But certain aspects of the story complicate matters without rewarding the audience. For instance, readers are assured that during World War II, Rafael repeatedly requested to be assigned to combat duty. The only reason he was forced to work in a military police capacity was due to his law enforcement background. This is not a particularly exciting or captivating part of his character when bigger problems are just emerging. In addition, the dialogue sometimes relies on such stock phrases as “Where are you going?” and “You’re amazing.” Nevertheless, the tale develops quickly, with the entire story coming in under 200 pages. Not much time is wasted once the main events get going and Rafael and Clara try to stop the bad guys. And even after the gripping novel has concluded, there proves to be plenty of intriguing material left for the sequel.
-END-
So there you have it gang. Can't wait to see what they'll say about the other 3 books in the series, or the next one "Forever Chosen" which will coming out later this year!
In the meantime, if you haven't already got your copy of "Forever's Too Long" it's available in e-book, paperback, and audiobook form! Just click the link that works for you from the list below: