By Allan Krummenacker - March 03, 2013
I'd like to welcome my guest blogger Michael Brookes who will be discussing book covers.  In particular, he'll be addressing how he chose the cover for his new book "CONVERSATIONS IN THE ABYSS".

If the eyes are the windows to the soul, then the cover is the gateway to your book. Whether it is a paperback or a Kindle download, the cover is usually the first thing the reader sees. A good cover attracts the reader’s interest. Hopefully it interests them enough so they read the blurb (that’s a whole other topic!) and then purchase the book.

It’s also a part of the publishing process that I enjoy. Not as much as writing the book, but it’s still a fun part of releasing a book. I’m no great artist, but as I’m writing I usually have some idea of what I want the cover to be.

That’s the first stage of the process. You need something strong. The cover not only needs to attract attention, but convey what the story is about.

For ‘Conversations in the Abyss’ much of the story is about a character who creates his own tableau of a Parisian cafe alongside the abyss. In this case the abyss is a river of souls that acts as a border between his mind and the next world. I felt this was such a strong image it needed to be the cover for the novel.

A great idea, but I bumped into another key aspect to creating a good cover. It needs to be achievable. As already mentioned I’m no great artist. I am lucky enough to work with talented artists in my day job and I realised I couldn’t do the idea justice.

By this stage the book had been sent off for a final edit pass so I had time to focus on the cover. I needed something simpler, but still strong enough to represent the story. I trawled through stock photography and illustration sites looking for inspiration. I tried a few ideas, but nothing worked. I was still fixated on the idea of providing a sense of location. Unfortunately the key locations are fantastical, so finding the right images was impossible.

The breakthrough came when I changed my approach. The main character steals a miracle that grants him immortality, but the miracle wasn’t intended for him, so it comes with a price. The price is a fire that burns all through his body. This suffering is a key part of his experience. Coming from this angle I found a couple of key images that when combined provided the concept I wanted.
Or rather it gave me two concepts I wanted. 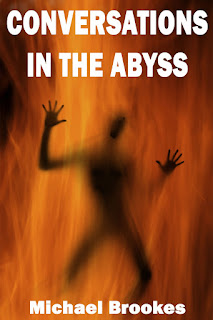 I liked the subtlety of the first concept, although as somebody pointed out it would get lost when displayed on the Amazon web site. That raises another point, the cover needs to work where it is being used. So for the e-book I’ll use the cover with the fiery background. I’ll use the white concept for the print edition. The best of both worlds!

Finally the cover needs text, the name of the book and who the author is. Naming a story is an art in itself, I was lucky that the name triggered the story so I didn’t have to worry about that. When it comes to typography I’m a great believer in keeping it simple. The text needs to be readable above all else. At a glance you should be able to read the title. In this online age you also need to be aware that the cover will be displayed at small sizes, so zoom the image out and make sure you can still read the title and author.

Finally let’s touch on the tricky subject of licensing. Make sure you are allowed to use the images and fonts you pick. It’s not too expensive; I paid £25 for the images I used and have a suitable commercial licence for them. Check the terms and conditions of the sites you get your images from. Don’t just download images you find on the Internet without checking, you might be creating a legal problem for yourself.

In the end I didn’t get the cover I thought I wanted, but I did get the cover that I am pleased with and I hope will sell the book. I hope you agree.

Conversations in the Abyss

‘Conversations in the Abyss’ is the sequel to the 5 star rated supernatural thriller ‘The Cult of Me’
Stealing Lazarus’s miracle gifted him immortality. Combined with his natural ability of invading and controlling people’s minds this made him one of the most dangerous people on Earth.
But the miracle came with a price. His punishment was to be imprisoned within the walls of an ancient monastery and tormented by an invisible fire that burned his body perpetually. To escape the pain he retreated deep into his own mind.
There he discovers the truth of the universe and that only he can stop the coming Apocalypse.
Buy now from Amazon:
UK: http://www.amazon.co.uk/dp/B00BCP08JU/
US: http://www.amazon.com/dp/B00BCP08JU/

Michael Brookes is an Executive Producer with a leading UK games developer. Working in games and writing are two of his life passions and considers himself fortunate to be able to indulge them both. He lives in the east of England, enjoying starry skies in the flattest part of the country. When not working or writing he can sometimes be found sleeping. Which is good as that is where many good ideas come from.

Other Books by Michael Brookes

The Cult of Me
For too long he dwelt apart, watched those who passed him by. With his unique abilities he entered their minds and inflicted terrible suffering upon them. They didn't even know who he was. The game has lasted for years, but now the game has become stale. On an impulse he decides to make a final and very public last stand. After surrendering himself to the police he enacts his plan to seize the prison for his final bloody act.

There he discovers that he's not as unique as he once thought.
http://www.amazon.com/The-Cult-Third-Path-ebook/dp/B008O7ZVXW/
An Odd Quartet
A quartet of dark short stories (10,000 words) to thrill and chill.

The Yellow Lady
Grave robbing is a dirty business, in more ways than one. When he disturbs the grave from a childhood scary story he discovers it's not always treasure to be found.

This Empty Place
At the heat death of the universe, Death contemplates his existence.

Forced Entry
Terrorists seize an average suburban house. A Special Forces hostage rescue team is sent in and encounter more than they were trained for.

The Reluctant Demon
A young demon prepares to take his possession exam.
http://www.amazon.com/An-Odd-Quartet-ebook/dp/B009QJMMPC/