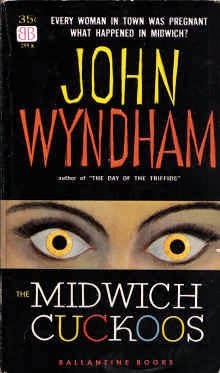 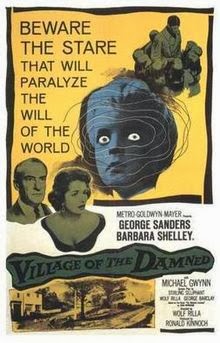 MY RATING:  5  STARS OUT OF 5
I was very excited to finally get my hands on a copy of this book after seeing the 1960 movie "Village of the Damned" that was made based upon it. My wait was not in vain. While the movie followed the storyline and even small details very faithfully, actually reading the story was much more fulfilling.
I can understand the changing of the title, since not many are all that familiar with cuckoos aside from cuckoo clocks. In real life, cuckoo birds are rather parasitic in their behavior. A mother cuckoo will lay her egg in the nest of another bird (who is not a cuckoo) and leave it among the other eggs already there, and take off. The cuckoo's egg will usually be similar in size and coloring so the foster-mother will not notice the additional egg and will care for it. Unfortunately, the cuckoo egg will hatch way before the other eggs, producing a very demanding chick who will constantly want to be fed and cared for. While the foster mother is away, the chick will evict other eggs or even other chicks when they finally hatch. The cuckoo chick will run the mother ragged to satisfy its own needs. Yes, nature can be cruel and even ugly sometimes.
In this novel, Mr. Wyndham applies this same principle to humans. In the village of Midwich the "Dayout' occurs. The entire village falls unconscious for hours only to awaken confused and uneasy. Soon it is learned that every girl and woman of child-bearing age is pregnant. The stigma of unmarried mothers as well as the accusations of infidelity runs rampant. The women are on put on spot for quite a while unable to defend themselves.
Mr. Wyndham questions a number of society's expectations of women and moral behavior within this book which I personally liked. At another point in the story one of the lead male characters talks about women he went to school with. He laments that there were young ladies who were extremely intelligent and had great future prospects, who wound up marrying and losing their chance to fully explore their full potential.
Eventually, the story raises other questions after the 'children' are born.  Namely the demands of motherhood, such as breast-feeding. In one scene a woman begins to breast-feed her newborn 'child' in public (remember this book came out in 1957, and there's still a lot of arguments about breast-feeding in public today). The woman feels humiliated but explains angrily that she cannot help herself. The child demands it. Soon other strange compulsions arise from the other children born as a result of the Dayout.
Nature vs nurture comes into question as well. The 'Children' do not demonstrate affection or much feelings, except when threatened or angered. They have no problem being housed together away from their families when the chance arises. No matter how much kindness or affection has been given them, there is no affection offered in return.
Before long it becomes apparent these children are much more than human and they soon make it clear their long term goal is to supplant all normal humans in time. Plus they have the psychic powers to do it, which they demonstrate more and more. Even to the point of planes flying far overhead, suddenly dropping out of the sky. The pilots do not necessarily eject either folks. This is a blatant warning to those in authority not to try attacking from a distance or from above.
The book is a fascinating read and raises a lot of interesting questions. It is a classic and thoroughly worth reading. I highly recommend it.