Helen has been a major force behind my entire Para-Earth Series since the days before I first started to actually write "The Bridge".  She's been my confidante, grammar checker, science expert, adviser, and so much more.  So without further ado, allow me to let her take over today's blog and answer some questions that we've encountered recently. 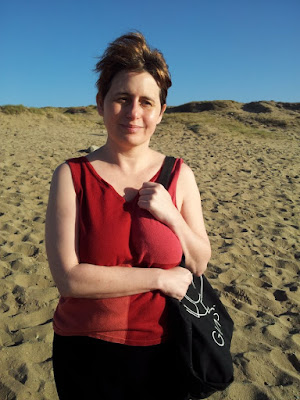 Allan has already published 2 books. Why are you now a co-author on his latest?
He’s been doing fine writing on his own, I agree. I always did give him some input and advice on the other books, but while I’ve helped bring in science fiction angles and suggested some ways to improve character development, the other books were all his plots and his writing.
This one is still his plot, but there’s a specific character in it who helps explain some of the scientific elements and who was entirely my creation. We talked a lot about the relationship between my character and the main character, and developed a history together. Then Allan placed him in the rough draft, and asked me to look over all the scenes with him and make adjustments. At first, I didn’t want to touch it too much, because the novels were so much his thing, but there were areas where I really wanted to rewrite most of the scene and… he loved it. I added things that weren’t there, digressions into biology, a non-American viewpoint, and other things that helped.
Developing the relationship between the two characters: let me guess, you created a love interest for your husband’s lead character?
I think The Professor and Nathan would be VERY surprised to have someone take them for lovers. Hopefully The Professor will be very charming to the readers, but he won’t charm most of them *that way*. He’s sort of a bit Professor Challenger-ish, a bit Doctor Who-ish: a sage and a mentor who has oodles of personality.
Is he based on you?
Not much. He’s actually a figure from a dream. When Allan and I were first discussing his ideas for this series and I was giving him feedback and suggestions, I had a dream which had me having the actual viewpoint of Ronnie, the policewoman in the first novel. She went to respond to a call and found a dead man in an upstairs study and another man examining the body. She warned him to stop and he backed away to the window, then did a backflip out of it and ran.  Later, he came to the police with a story about invading monsters and a plan to stop them. I was intrigued by him and worked on developing him.
Will you be participating in more of these novels?
Definitely. I’ll be helping with the second part of The Vampire Blogs, probably with a greater role in the plotting and scene development. We’ve also started on a full collaboration, working title The Misty Mountains, set in Santa Cruz again. On that, I’ve been doing at least half of it, I think, and more of the plot development. It’s also going to be far more science fiction than paranormal. The Professor is a major character in that one, along with Johnny and Michelle from The Ship. He’ll be using a different name in that one, so I’m calling him The Professor now to alert people that he basically never uses his real name.
I’ve also been writing a story about a prior adventure of his called Cretaceous Lark.
Why are you skewing things to science fiction? Don’t you like paranormal?
When Allan and I were first discussing the Para-Earth idea, we talked about how the thing that made H. P. Lovecraft’s writings so fascinating was that he gave his horror a science fiction spin. It made it much easier for me to believe. I like reading stories with ghosts and vampires, but the fact is, it tends to increase my awareness that I am reading fiction. When I read stories like “The Colour Out of Space” or “Beyond Ultraviolet”, I was genuinely scared. So we agreed the foundational idea would be science-based. But Allan isn’t confident about science. He loves that I am bringing it in. On the other hand, while I like ghost stories, I don’t think I’ve ever written one. That’s a bit outside my comfort zone. But I have an idea for Alex and The Professor and a ghost that I’d love for Allan to help me with. So basically, we each tend to develop ideas in our strong area and need the other to help build in the other direction.
Do you find it easy to work together, or do you tend to argue?
Easy. I love his ability to pace writing and keep you wanting more, and he’s a fan of my ability to cut through to the meat of a scene. I rely on him to know if something works from the point of view of a reader, and he trusts me to make words sing. Our differences make us better together. 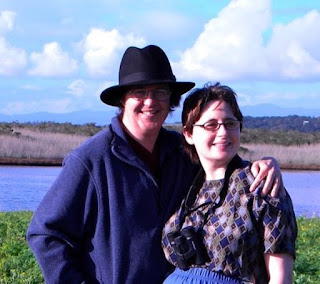 What’s the process like for you, writing together?
Well, with the first book of The Vampire Blogs, as I say, he wrote the first draft and then I took my seat in the writer’s chair and reworked scenes. Plus I kind of demanded he rewrite one area because he forgot two characters were in the scene. But with The Misty Mountains, we talk about what we want to do in advance, and then I wrote the opening and passed it along for him to fill in the first part of the next scene, then we actually wrote some portions in real time together, each at our own computer at a shared file and writing dialog and actions in response, like we were basically improvising as actors, but with writing. Another couple of scenes cutting to minor characters I wrote, and asked him to polish one because it was more in line with his area of knowledge. We have a lot of fun, like when we used to play Dungeons and Dragons together.
What should people know about The Vampire Blogs?


It’s a very funny book, with a lot of heart. Sure, there’s a terrible monster and suspenseful stuff-- but I think people are going to smile a lot. And this is really a regular thing for us. There’s so much to stress about in the real world, fiction should, on balance, make you feel good.
Well, that's all I have for now, except for repeating the announcement that "The Vampyre Blogs - Coming Home" will be released on October 28th, just in time for the Halloween weekend, so keep your eyes open for the links to the various sites where you can get your copy.  We'll be posting them soon. 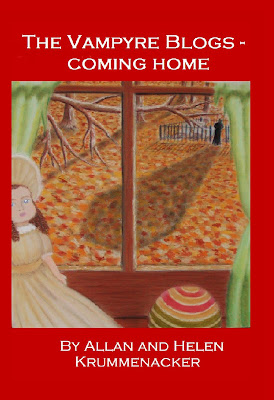 Until next time, as Allan always says in this blog, take care and keep writing.