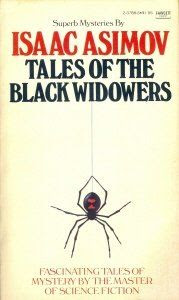 Isaac Asimov is well known for his extremely numerous writing contributions to science and science fiction.  But not everyone knows he was also a mystery author and regular contributor to Ellery Queen Magazine, as well as a few others.  His most famous crime sleuths never actually went to a crime scene, nor did they go into police headquarters and announce they had cracked an important case.

No, these amateur sleuths, who call themselves the Black Widowers because once a month they come together for a dinner of just themselves and one invited guest, a man.  Women are not allowed to attend this function, hence their nickname.  For one night a month they can enjoy just the company of each other without female company, not that they object to women.  It's simply their own little club.  The members of this little club are based on friends from the author's own life and are listed here:

At each meeting a guest is brought by one of the members and after being served an excellent meal, are then 'grilled' by the group, usually by being asked "How do you justify your existence...?"  What happens in the first story sets the stage for the rest of the tales within the pages of this excellent work.

A puzzle is presented to the Black Widowers who systematically try to help find the answer to their guest's dilemma. In the end, it is the esteemable Henry who provides the final solution to each of the twelve tales you will find here.  Each story is presented fairly and the reader is supplied all the hints that the Black Widowers are given.  Although Henry supplies the answer, he always credits the club members for having helped eliminate all the other options, allowing him to discover the final solution.

My personal favorite in this collection is "The Acquisitive Chuckle" which is also the 1st story.  In it we learn a great deal about our hosts and even more importantly we gain keen insight into their wondrous butler Henry, a scrupulously honest man, but who is not above delivering a little payback to an old partner.

There is one puzzle that involves a death of one of the club member's sister, which is touching and bittersweet, but handled very well.

As for the rest of the tales, each has its own flavor and unique outcome.  I can safely say that they are wonderful puzzles that will keep you guessing and wondering.  But at the same time it is the interplay between the characters will also keep you smiling and laughing.

There are 5 books in this series and I will tell you right now, each one is a 5-Star read.  I intend to review each of them as in the near future.