New Thoughts and Insights About Collaborating...

By Allan Krummenacker - November 18, 2017
Yesterday I had an epiphany about my writing and the entire Para-Earth Series... it's been a collaboration all along.  From "The Bridge" to "The Ship" to "The Vampyre Blogs -Coming Home", the entire journey has been one gigantic collaboration with my wife/best friend Helen.  And I am planning on putting her name on the first two books. 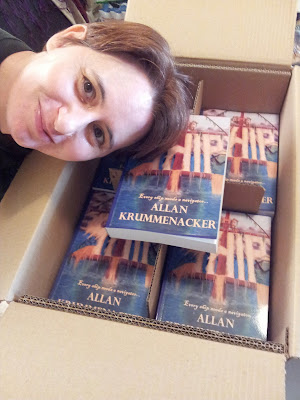 Why didn't I do this sooner?  And how did I not realize it was a collaboration all along?  Because I thought a collaboration strictly meant two people were doing the actual writing, but that's not the only way a collaboration works.  Ideas, suggestions, helping shape characters, plot, settings, events... all of that goes into a collaboration as well.

So even though I did all the writing in "The Bridge" and "The Ship", Helen gave me so much guidance like helping shape the characters personalities, questioning their actions, being my sounding-board for ideas I had but didn't know where to go with them until she suggested details or options I never considered which suddenly put the story back on track again... you name it.  To me, she has been just as much a part of those books as I've been.

Now, some of you might be wondering how did this realization come to me?  Well, it had been bouncing around in my mind for some weeks now but yesterday is when it finally clicked into place for me.  As many of you should know by now, Helen just recently got offered a job at Santa Cruz County.  Well, yesterday was her Orientation Day and she officially starts work on Monday as an Accounting Technician (I'm so proud).

Well, when my day ended we were driving home and I started sharing with her that I was working on a new short story for our other blog "The Vampyre Blogs - Private Edition" (where we post brand new short stories involving characters from our book "The Vampyre Blogs - Coming Home" Link: https://thevampyreblogs.blogspot.com/   *NOTE: Characters from "The Bridge" and "The Ship" have also appeared there and will be showing up again soon so keep an on that site).   Some time ago I had decided that Lisa (one of the main characters) was a gifted psychic. 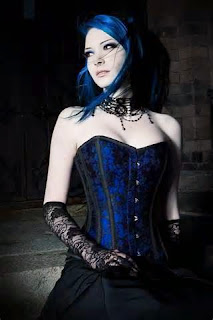 *Note: Lisa is often mistaken for a Goth, but she merely loves old clothing styles and vibrant colors.  She's actually into clothing design and cool make-up, including special effects*

Mind you she is not nearly as strong as Alex, Cassandra, or the Baby from "The Bridge" and "The Ship".  Lisa's talents show up in the form of glimpses into the near future in dreams, as well as being sensitive to strong emotions both past and present, but she's only starting to realize it.

*SPOILERS FOR THE SHORT STORY AHEAD: Lisa's been having dreams where she senses the danger from the first book is not completely over and that more darkness lies ahead for not only her and those she loves, but the entire town where she and Nathan live.  But that was as far as I had gotten when Helen suddenly sprang to life and suggested a scene in the waking world that indicates there is indeed a threat.  A certain modern-day life form, that is similar to the Para-Earth life-form that makes our character Nathan a vampyre, are fleeing the area.  Upon seeing this, Lisa realizes there is something coming prompting her to see if Nathan has returned or not.  This will tie into the opening scene of the 2nd novel in the Vampyre Blogs section of the Para-Earth Series.

As soon as Helen made this suggestion the rest of the story came to me in a wave.  I could clearly see the path forward and immediately asked her to help give more life to the characters of Lisa and her best friend Marisa who also will appear in the story.  She naturally agreed, having taken a crack at writing both girls recently for a story in our upcoming anthology "The Vampyre Blogs - One Day At A Time" coming in January 2018.

Now, this has been just one of many examples of how a collaboration can work when it comes to writing.  I have many more to share, including one with my other Collaborator Rich Caminit which I will share in my next post.  Plus others that I will continue to share down the road.  For now, I'm going to leave you all for now, before this entry turns into the length of a novella.  But please give thoughts to other forms of collaboration you may have encountered and please share them with all of us in the comment section below.  As I've already said, collaborations take many forms and the roles each collaborator takes is not simply one but many, and this is why I feel collaborations are something that should sometimes be embraced whole-heartedly.

And on a final note, don't be afraid to share the credit for a project.  As Samuel Goldwyn the great movie producer once said...

When someone does something good, applaud! You will make two people happy.

Until next time, take care and keep writing my friends.