Review Of Jack Finney's novel "Invasion of the Body Snatchers" 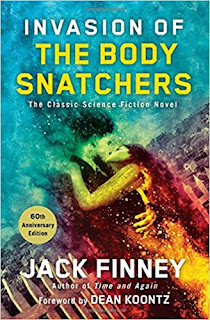 NOTE: This review contains spoilers, so read only if you choose to.

Ever since the 1956 black and white classic movie "Invasion of the Body Snatchers" was released certain phrases became part of everyday life for most folks.  I've heard things like:  Pod person?  Have you checked his/her basement for any giant seed pods?  So-and-so is acting weird, you think he/she might've been switched by a seed pod?  Dunno, if they did it's an improvement... (this one was directed at me more than once, fyi).

But before the movie came the novel, a brilliant piece of fiction by Jack Finney (who also authored other great works such as "Time and Again", "The Night People" and many others which I hope to read and review down the road).  However, it was "Invasion of the Body Snatchers" that captured the minds of readers.  Released in 1955, it was subsequently snatched up by Hollywood to be made into a movie in 1956.

Interestingly, despite the time of the book's release Mr. Finney seems to have had no intention of making his book about McCarthyism or the "Red Menace" (referring to Russia and socialism during the Cold War).  Instead, it seemed to hint at the loss of individuality and personal freedom, as well as (from my point of view) the overuse of the planet's resources.

Those who've seen the original 1956 movie already know the basic plot, a small town doctor in California begins encountering patients who swear their nearest and dearest are not who they appear.  Each of these people swear that somehow their mother/father/uncle/teacher you name it... has been somehow replaced by a doppleganger who intends some kind of menace.  The patients admit that the individual in question looks, sounds and acts like the person they've known all their lives, but SOMETHING is missing and that's how they know the person they've loved has been replaced.  Naturally, the good doctor talks to some of these 'replaced' individuals and finds nothing amiss, at least nothing he can really put his finger on.  And being a man of science and medicine he chalks it up to mass hysteria, especially after referring some of the patients to a psychiatrist friend of his (unknowing of course that his friend was replaced some time back).

The doctor then meets an old flame who's come back to town and they start dating only to notice there are some differences going on in their little home town.  Restaurants that were normally busy as can be are practically empty, some of the homes/businesses seem to be slacking off on work and even basic maintenance, etc.  Then some of the good doctor's patients who had complained that someone close to them had 'changed' begin telling him (with exaggerated embarrassment) about how silly they had been acting and that all is well, etc.

Of course we the readers are fully aware that something is up and follow the doctor and company slowly catching on as well.  The final proof for our protagonists comes when a close friend summons him late at night to check on a 'dead' body found in his basement.  As one can surmise, the body is one of the invading pods that is slowly replicating the doctor's friend, little by little in an attempt to replace him.  This is where the action really kicks into high gear as the pieces start coming together for our heroes and heroines.  The clock begins to tick and the horror begins to dawn on them as they discover hidden pods making these duplicates and now they must alert the town only to learn to their growing horror that they may be the last 4 normal humans who are not being targeted for replacement.

All of this can be seen in the movie, which was shot on a shoe-string budget to great effect.  However, there are certain scenes which were left out which shows that the pods were not as intelligent as many think.  The doctor speaks with a botanist who tells him about a farmer summoning him to his barn where a some strange large pods showed up amidst his trashcans.  The botanist tells the doctor that aside from the unusual pods ("...which over time I probably could have identified, but not right then...") he saw nothing unusual except two empty tin cans of tomato sauce that looked remarkably similar, along with 2 axes with identical broken handles amidst the rubbish.

Another part that is left out of the original movie is the revelation that the pods travel through space and purposely land on various planets or astral bodies in search of things to duplicate and replace.  "The moon was quite lush at one time..." it's revealed, "Mars too..." For me, these passages raised the threat and terror levels to all time highs.  Furthermore, the pod-people reveal that they only have a 5 year existence, and that they cannot reproduce themselves, thus they must help grow more pods to keep their 'race' alive.

At this point the idea of not McCarthyism or Communism being the implied threat went out the door for me.  The good doctor gets the pod people to reveal that they can duplicate anything that is/was alive and that the originals simply crumble to grey fluff after being duplicated and replaced.  Meaning grass, trees, animals, etc.  In 5-10 years time everything on Earth would be duplicated and then the duplicates would themselves perish, leaving a dead planet behind while the newest pods would float up back into outer space and find another world to drain of its resources.  At one point the pod speaker says, "How is it any different than the way your kind are using up what your planet offers?"

Again for the most part, the movie closely follows the book remarkably well.  However, the climactic finish differs wildly... and I'm NOT about to share it with you.  This is a cracking good read so I suggest you get your own novel, Kindle/Nook, or audio version of the story and let it capture your imagination.