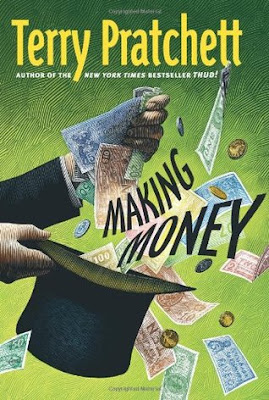 The Bank of Ankh-Morpork has gone to the dogs... or rather the dog of the now deceased chairman of the bank.  When Topsy Lavish died, she willed her controlling shares in the bank to her dog Mr. Fusspot, who she in turn bequeathed to the least trustworthy man in all of Ankh-Morpork, Moist Von Lipwig former con artist and now "reformed" character.

Soon our dear Mr. Lipwig finds himself trying to deal with the entire Lavish family who all want Mr. Fusspot dead, while at the same time he has Lord Vetinari the city's Patrician, breathing down his neck to give the city a loan to fund some much needed infrastructure improvements.

But the Bank and the Mint both run on the gold currency, and there's only so much gold to go around.

Soon Moist is in mischief and high finance up to his ears.  Wheeling and dealing, talking a mile a minute and selling the idea of paper currency to the inhabitants of Ankh-Morpork.  Can his fast talk and silver tongue keep him ahead of his enemies as well as his old partner, who remembers him as Albert Spangler notorious crook and con-man?

The jokes and imagery Mr. Pratchett creates within this novel are as fast and furious as ever.  Yet at the same time, he provides the readers with a good look into the way banks operate and how financial decisions are made.

His unique blend of comedy with fact is an amazing achievement that keeps the reader both entertained and informed a the same time.  However, he never loses that wry sense of humor that keeps his audience in stitches.  The image of Mr. Fusspot and the self-winding 'toy' he finds amidst piles of leather garments, whips, and chains, provides some classic imagery throughout the book.

Mr. Pratchett is indeed one of the finest comedic authors of our time and this installment of his Discworld series proves it.  Truly worth 5 stars.  A fantastically funny read.
Ankh-Morpork book review Discworld hilarious humor Moist Von Lipwig Terry Pratchett