Book Review: Joan Hess' "Death By the Light of the Moon" 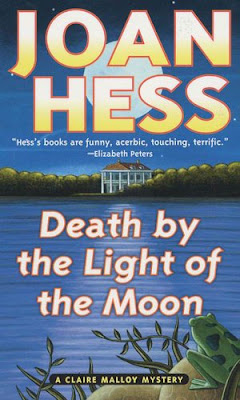 Death by the Light of the Moon by Joan Hess was something I picked up from a Friends of the Library sale, a paperback mystery marking itself as A Claire Malloy Mystery. I’d never heard of the series, but the description was interesting. An eccentric, rich elderly lady dies the evening of a party that was meant to reveal her heirs. The protagonist is there by virtue of being a daughter-in-law, and barely knows the family.

The basic plot is grounded in the “cozy” style of mystery-- the murder takes place in a somewhat remote area, limiting the suspects mostly to the family, with a few hints about something more being afoot. The protagonist is not a professional detective, just someone with a knack for coming across trouble and ask questions. As the story goes on, it becomes a bit less cozy in both the genre and descriptive sense, as more bodies turn up and the protagonist becomes a target, giving a bit more of a thriller vibe at times.
I found this to be not only satisfying as a mystery. The author has a sense of humor and a way with words. The prose makes for a light, easy read, and yet there are digs, gentle in some cases, hard in others, at real ways in which worse aspects of human nature tend to surface, reminiscent of Jane Austen, or perhaps P.G. Wodehouse. From the self-absorbed digressions of a teen, to the small-town police who almost prioritize getting along over getting answers (but who do change their approach appropriately as events unfurl), to the sexism and racism causing real, secret problems for a family of Southern aristocrats, the foibles are observed with wit and honesty. The protagonist even has her own failings

It would have definitely been worth buying at full price, and I look forward to finding more of the series.
cozy human nature humor Jane Austen Joan Hess murder mystery P G Wodehouse