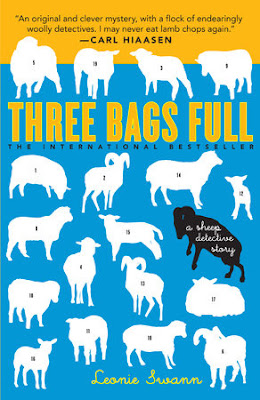 Mystery stories have to work hard to set themselves apart from the crowd. Some do it with an underlying nonfiction theme, such as mystery novels/recipe books. Special settings can be useful. Most of all, characters are a way to be distinctive and memorable. There’s an entire bookshelf in our house of mysteries with animal detectives.

Cats make up the majority of animal detectives, able to roam freely and unobtrusively. Three Bags Full takes a different, and possibly unique path. As the name suggests, the mystery is being worked on by… sheep.

It begins with the discovery of the death of their shepherd. Even they can tell it is not natural causes, because he has had a spade stuck in his body. Whether it is the cause of death or not, it is a definite sign of violence and took place in their pasture, at night, while they were in a barn. They are disturbed; it is very like and yet unlike a wolf attack. The sheep vow that, as he protected them and cared for them in life, they would see his killer brought to justice.

From early on, it is evident the sheep are unusual (and some of the most interesting subplots come from the secrets of the sheep themselves being revealed). Even so, they are terribly unsuited for the task ahead of them-- to solve a murder, one must understand how human society functions, and they start out knowing so little about it that they draw conclusions like the priest’s name is God, because they heard him welcome people to the house of God. He seems to talk about himself a shocking amount. (I find their attempts to understand religion quite amusing.) They also have to understand those parts of their shepherd’s life that don’t involve them, and, indeed, we the readers are somewhat puzzled by the parts that do. He seems to have deliberately brought in sheep that might have been in danger elsewhere, won’t sell any of them, reads books to them, and wants to take them on a tour of Europe.

The best thing, for me, is that the writer, Leonie Swann, puts so much empathy into working out the way sheep might think. They aren’t little humans in wool coats; they are nervous, social, forgetful (except for Mopple, the Memory Sheep, who acts as a sort of living notebook for the flock), and they can gather information through their sense of smell. They also have their own culture; human society may be a mystery to them, but they have their own aphorisms, superstitions, and generational knowledge. Within the flock, each sheep still has individual identity. Miss Maple is extremely clever, Othello is brave, Cloud is kindly, Zora has imagination, and there are many more special traits and sheep.

I would recommend this even without having finished it yet. It is the kind of book where the experience of reading and thinking about it make the journey a joy, regardless of how the plot wraps up in the end.