By Allan Krummenacker - September 23, 2018
*Blogger's Note: I know I promised to continue about our experiences with creating our first anthology, but massive colds have been kicking us around.  Hope to get back to that subject next week.  Until then, here's another book review.  Enjoy* 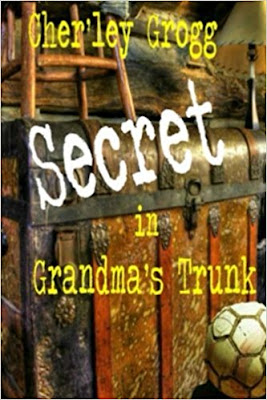 This was my first venture into the writing of Miss Grogg and I have to say I was quite pleased.  This tale took me down the winding passages of my own childhood memories involving friends, relatives, and grandparents (who I sorely miss).

The story begins with Brandon having to move into his little brother's room, because his elderly great-grandmother is coming to live with his family.  Brandon is not happy about this and even resentful.  But we quickly see the conflicting emotions within him early on when he first meets his great-grandmother who is full of spunk and not one to be pushed around in spite of her advanced age.  But in addition to that fiery spirit she brings an old fashioned trunk that captivates not only Brandon's imagination but those of his little brother Melvin and their cousin Alisa.

Soon the trio find that there may be more to great-grandma than meets the eye, making Brandon's feelings towards her more complicated.  Eventually we learn that he's afraid of growing too fond of her because she is so old.  He has already lost his other grandparents who were not nearly as old as her, and he still misses them terribly.

Miss Grogg fleshes out her characters extremely well and makes the reader dwell upon family and friendships, as well as the realization that even though we may one day have to say goodbye, there is so much to be enjoyed in the here and now.