Book Review: "The Haunting of Gospall" by Solomon Strange 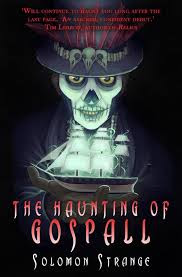 Mix one part voodoo, one part devil worship, three parts the darker side of human nature and you get "The Haunting of Gospall".

The author does a wondrous job of blending these three elements into a intricate yarn that transcends the high seas. He starts us off with a brilliant opening scene upon the SS Gospall in the 1800's, showing a keen insight of what sailors and captains faced on the open waters during one of the more contentious periods between England and France.  We're introduced to characters we come to admire and care deeply for, both in the 1800's and the present, as the tale unfolds and a mystery that links the two time periods slowly unfolds.

We meet Sean, who is blessed unwillingly with psychic talents that has led him down a dark path once before.  The author also introduces us to his beloved Sophie who not only listens to him when he starts telling her about strange events that led not only to his mother’s death, but also the strange visions and encounters he has been experiencing.  Led by Sophie, they start digging deeper into the mysteries which leads them to a meeting Seamus Mallom, a former exorcist, with demons of his own that led to his hanging up his white collar... so to speak.

Soon the trio find that all that is happening around them and the world seems linked to the final fate of the Gospall, the villainous pirate Santia that had usurpsed command of the vessel, and an island where the darkest of magics were being performed.

Sins of the past and a final battle for salvation hang in the balance, but is it already too late for the world?

A ripping good yarn, especially for the Halloween season.