By Allan Krummenacker - November 24, 2013
Today, I'm going to be setting aside progress on my writing and giving advice to praise one of my all time favorite shows that just turned 50 years old, "Doctor Who".  This show has been a part of my life since I was 3 years old at least.  How can I be so certain?  Because it was way before I entered kindergarden that I saw a creature that captured my very young imagination, a Dalek. 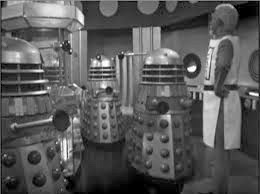 It is said among the Doctor Who fans you never forget your first Doctor, for me I never forgot my first villain. These oversized 'Pepper Pots' fascinated me to no end.  So every time I happened to run across them again, I was able to realize a show I'd loved had come back.  Or rather I'd found again.  Being so young I'd had no concept of time and what day of the week it would be showing again.  My first Doctor was Hartnell.  Mind you I'd also caught the Peter Cushing movies, but when I saw him in the role I thought, "I remembered the Doctor as being older with white longer hair."  Now don't get me wrong, I'm not saying I was watching the show from the day it started.  I was still inside my mom when the show began, plus I was in America not England.  No, I'd caught some re-broadcasts that had come to America I'm guessing.  In either case, I was hooked.

However it wasn't until the early 70's that I really could keep up with things.  Once more I spotted that familiar blue police box while changing channels and out came the Doctor.  Still with white hair, but much taller and agile.  I'd discovered John Pertwee, the 3rd Doctor. 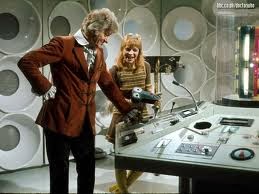 Again I was entranced and was soon introduced to the concept of regeneration and Tom Baker, the fourth Doctor.  The problem with the show for me was of course it disappearing from time to time from the TV stations in New York.  I found Tom again during the Pyramids of Mars.  Then the show was gone again. 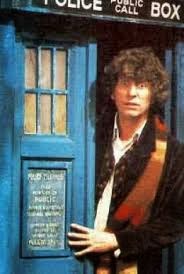 Luckily, after moving to California I found the show once more on PBS.  Tom was still doing the Doctor, but the show was being interrupted by a PBS Pledge Break.  At first I was annoyed.  I thought, "Here we go, scrounging for money for television...yadda-yadda..." But then I saw the phone banks were filled with people in costumes from the show.  It was the Sacramento Doctor Who Fan Club.  Having just moved I had no real friends and was wondering how I could meet some.  Thanks to Doctor Who, I'd just found a way.  I found out where they met and began attending meetings and quickly joined.  Not only did I make a bunch of life-long friends,  I alsoI met the woman who would become my wife Helen Henry.  Over twenty years later we're still devoted to each other and are still watching the show with all the enthusiasm we had back then.
Soon I found myself doing costumes and working pledge breaks as one of the shows villains, "The Master". 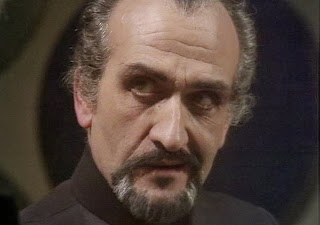 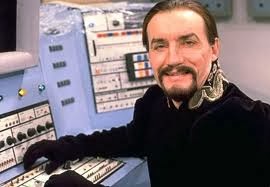 Sadly, I do not have any photos of myself in costume to share right here, as most of my stuff is in storage after we moved to Santa Cruz and then Marina in the last 7 years.

In any case, the group also introduced me to conventions, which captured my imagination even further.  I made more costumes and even a replica of the Doctor's mechanical dog K-9, but with a twist.  Since I was doing the Master, I made a black and silver version which had moving ears, light up eyes, the head went up and down and it could move by itself thanks to the remote control tank I'd used for the basis of it.  It made a huge hit at the conventions and on the pledge breaks.

FYI, as soon as I can get my old VHS tapes out, I'm going to transfer all the pledge breaks I have to my computer and post them onto YouTube for all my old friends who lost their copies.

Anyway, to continue.  Doing all these fun things got my mind working in another direction as well.  Writing, I did my first Fan-Fiction piece about one the doctors showing up on the set at one of our pledge breaks and mayhem ensuing partly thanks to me being dressed up as the Master.  NOTE: The Doctor's companions make great plot tools especially if they've only heard a description of the Master, and said companion is a female warrior who's always spoiling for a fight.  Needless to say I was not the hero of the piece as much as the comedy relief.  In any case, this was my first journey into writing and I found I enjoyed it.  Over the years that followed more fan-fic's came into being and I soon joined other sci-fi fan clubs and did more 'very amateur' fan-fics for them as well.

Eventually though, my writing style matured more and I realized I had come up with so many different stories and ideas that many of them did not fit either Doctor Who or another favorite show from my childhood "Dark Shadows".  In fact, I could easily leave out established characters and create completely original ones to go along with my original storylines.  (Sorry for the repeat of the word there, but it's  the only way I can describe what happened)

Now, several years later, I'm a published Indie Author.  My next book will be out in early 2014 as many of you are aware and eagerly awaiting.  But my origins as an author go back to Doctor Who.  That funny little man in a blue police box, and TV's first good-guy vampire Barnabas Collins in the original "Dark Shadows".  But it mostly goes to the Doctor.  So, on this day, 50 years after he first landed in an old junkyard on Foreman Lane, I want to say "Thank you, Doctor.  You made a huge difference in my life and I can't wait to see where you lead my wife and I, and all our friends, next." 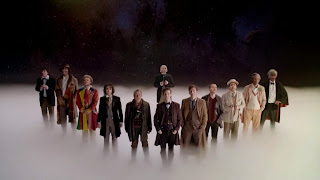