My Review of "Rosemary's Baby" the Novel... 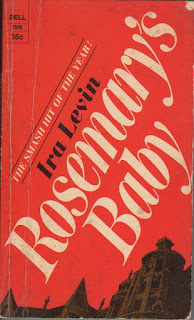 I've waited to get my hands on this novel for some time and it was certainly worth the wait.
Keeping in mind that this book was written and set in 1967, this novel is tame in some respects compared to the gore and horror many authors and movies unleash on today's readers. But they are able to do so thanks to the efforts of Mr. Levin and other authors who broke ground and explored these mysteries and possibilities.

Rosemary Wodehouse and her husband Guy find themselves searching for a new home in New York City, so Guy can pursue his acting career on the stage, and soon find themselves with the opportunity to rent an apartment in the old Victorian building called "The Bramford" which has seen its share of notorious characters including a Devil worshipper who claimed to have summoned Satan himself some decades ago.

But now, considered a respectable/historic structure, Guy and Rosemary take a chance after seeing the apartment who's last elderly tenant who slipped into a coma and never recovered. The young couple soon get to meet other residents of the Bramford, including their odd next door neighbors the Castavets, an elderly and rather eccentric couple who take an unusual shine to them.

Shortly afterwards, things begin to happen. Guy is getting more roles and his star begins to rise in the theater world as well as drawing attention from Hollywood. Shortly after that, Rosemary finds herself pregnant after a very unusual dream where most of the other residents of the Bramford, including her new doctor, are wearing dark robes and chanting while Guy makes love to her... or was it him?

Most folks know the full story so I won't go any farther, but I will say Mr. Levin does a very good job of creating an atmosphere of suspicion and isolation, while still surrounded by the city of New York.

The ending actually took me by surprise because of the ray of hope that still burned in spite of the darkness that Rosemary finds herself surrounded by.

I look forward to finding the sequel "Son of Rosemary" to see what he did with it.

I also highly recommend this book to anyone who has even a passing fancy regarding the supernatural and black magic. Even though it may not hold a lot of surprises, the story does have a lot to keep the reader busy.
Black Mass Devil worshipers hope Ira Levin isolation novel Rosemary's Baby Sabbath Satan witches