My Review Of Ira Levin's Classic Novel "The Stepford Wives" 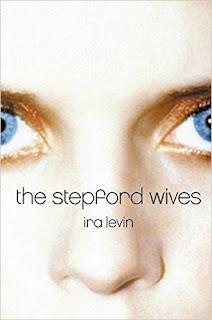 A few days ago, I managed to finally locate a copy of this book at my local used book store and immediately snatched it up.  Having seen both the original 1975 movie starring Katharine Ross, as well as the more recent Nicole Kidman version, I was eager to read the actual book that made the term Stepford Wives part of our everyday lexicon.

I'm going to assume that most people reading this blog already knows the story and how it ends.  If you haven't seen either movie I strongly recommend the 1975 version which is much closer to the book, and not read the rest of this entry until you have because it contains huge SPOILERS!

For those who are continuing to read this post you have been warned...

Mr. Levin once again presents us with an idyllic setting and situation, namely the homey little town of Stepford with its picturesque white picket fences and home town charms.  We meet Joanna Eberhart who has just moved here with her husband Walter and their two children Pete and Kim.

We quickly learn that Joanna is a modern thinking woman of her time (early 1970's) and is a freelance photographer who has made good money selling her photos to various magazines.  Walter is a successful lawyer who wanted to move from the city and raise his family out in this charming place.

Through Joanna we are introduced to the various residents of Stepford whose female population seems to have a strong leaning towards housework.  On her first night Joanna spots her next-door neighbor who is putting out the garbage.  While this is not unusual in and of itself, the fact that the woman, who is backlit from the light from her open door, appears to be wearing nothing at all.  Even when she returns inside her house, Joanna can clearly see her neighbor's perfect curvy silhouette in the window as the woman continues to do the dishes still naked.

We soon learn that most of the wives of Stepford are pretty much dedicated to being good housekeepers and making their husbands happy in every sense of the word.

Feeling out of step with the female 'crowd' Joanna is delighted to make friends with two other women who have only recently moved to Stepford; Charmaine and Bobbie.  Charmaine is a dedicated tennis player who has a clay court in her yard, while Bobbie is a strong woman with definite reservations about how the women of Stepford behave, vowing never to be like them.

After a weekend away with her husband, Charmaine proceeds to neglect Bobbie and Joanna who pay her a surprise visit to find she is having her tennis court ripped up to be replaced by a putting green for her husband.  Charmaine has also taken up housework with a vengeance and appears more full-figured than either Joanna or Bobbie remember.  Yet even more chilling are Charmaine's words when she is asked why, "Ed's a pretty wonderful guy, and I've been lazy and selfish..."  Such phrases like this are echoed repeatedly throughout the book by other wives as well.

As in his work "Rosemary's Baby" Mr. Levin uses the supporting cast of characters to present reasonable arguments that Joanna and Bobbie are just letting their imaginations run away with them.   He plants the seeds of doubt liberally, but never enough to be fully convincing.  Especially when Bobbie falls to the same fate as Charmaine, leaving Joanna more alone and afraid than ever before.

But the most terrifying part of this story for me was the knowledge that Walter, like so many other husbands, brought his family to Stepford for the sole purpose of having a 'sexy, obedient, fantasy' version made of his wife, knowing she'd be killed after the copy was ready.

For me, it was the enormity of this betrayal that provides the true horror for this piece.  The idea that the patriarchal sense of entitlement was more important to these men, than the lives of the women they supposedly loved is inexcusable.

At the time this book was written (1972) the women's movement was still going strong, in spite of facing huge resistance.  Yet 40 years later, feminism is still trying to make progress while being attacked with a vengeance on a number of fronts.  Wanting true equality for all, regardless of sex, gender, skin color, or whatever, should not be a crime or something one needs to fight for.  It should be a right offered to everyone.

Instead the struggle continues, which is why this book is still extremely relevant now.  Personally I feel this book should become required reading in high school/college in the hopes of opening more minds so that the future holds more opportunities and understanding for all.