With the coming of Halloween, I've been in a mood for scary books.  So today I decided to pull out one of my favorites and do a review on it.  This was the first novel I read by Mr. Straub, but it got me hooked.  I've read a number of his other works and he has yet to keep me entertained and enthralled.... 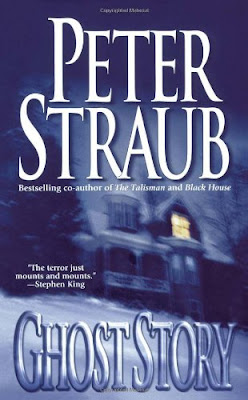 "What's the worst thing you ever done?"

"I won't tell you, but I'll tell you the worst thing that ever happened to me..."

They tried to bury that secret and forget it, but some things don't want to be forgotten. Sometimes, they also want... revenge!

"Ghost Story" is NOT a fast read. In fact it seems to plod along at times... HOWEVER, there is a method to the author's madness. Everything he gives us serves a purpose in the story.

Furthermore, his pacing and many references are reminiscent to classic ghost stories from long ago. Spine-chilling and haunting the story catches the imagination and refuses to let go.

However, it's not a short easy read. Mr. Straub has a lot of material to throw at us but does so in a manner that builds suspense and terror.

This is a brilliant piece of writing that is thoroughly worth a read. Just don't expect to be taken on a thrill-a-minute joyride. Like it's elderly protagonists, the story moves a slow and steady pace, but it draws you in deeper and deeper as it goes. Soon you'll find yourself wanting more and more as the various pieces and "ghost stories" start coming together, leading to terrifying encounters that build up to a mesmerizing climax.

My only beef with the story the first time I read it was the prologue which is longer than I would normally like to see. But as I said earlier, Mr. Straub links everything he presents us into one tidy and creepy package. Nothing he gives the reader is wasted, so I can forgive him for the lengthy prologue. This is still a 5 star read!

So come and meet The Chowder Society: The respectable Doctor John Jaffery, the randy Lewis Benedict, the respectable Sears James, and the faithful and easily overlooked Ricky Hawthorne. These men are not your usual run of the mill 'action-heroes', but they will take on an evil unlike anything you've ever read before.
classic ghost stories Ghost Story great read intrigue pacing Peter Straub prologue suspense terror