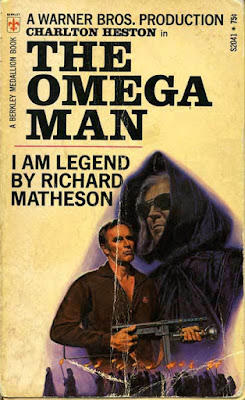 For those who don't know, Richard Matheson is one of my many favorite authors.  His work on the original Twilight Zone, caught both my attention and imagination.  To this day, I consider his novel "Hell House" one of the greatest haunted house stories ever written.

But he also wrote about vampires in his classic "I Am Legend" (aka "The Omega Man").  I was given a copy of this novel last Christmas and had finally gotten a chance to reading it. Having seen several movie versions of the story (including the one with Charles Heston), I was already familiar with the overall concept of the tale about the last normal human being on the planet.  However, knowing how Hollywood likes to put extra spins and its own touches on a story, I was eager to actually read Mr. Matheson's original vision and I was not disappointed.

We are quickly introduced to Robert Neville, who (as far as he and the audience knows) may be the last normal human being on the planet.  We get to see the strange monotony of his day as he makes stakes, rounds up food and supplies and goes about fortifying his home which is also a kind of tomb for him.  He is surrounded by the memories of his life, when he had a wife and child who were both taken from him, along with all those he knew, by a mysterious plague that killed everyone around him.  But at night, he is terrorized by a more frightening enemy.  Those he lost come out from the places they hide in the daytime, hell-bent on sucking his blood.

Former friends and neighbors try to breach his security measures night after night.  Some of the women try to woo him with the promise of sex and love, while one neighbor constantly calls his name, saying "Come out Neville!"  We witness his plight to hold onto his humanity and sanity amidst these nightly raids, and then follow him during the daytime as he tries to eliminate as many of these vampires.

Mr. Matheson shares Robert's memories of losing his wife to the plague and burying her, only to have her rise as one of the vampires and his being forced to put her down a second time.  Over a three year period we watch Robert become harder as well as a survivor.  He goes from being just the hunted to seeking answers.  I found this part interesting since, unlike in the most of the movies, he is not an expert in blood or disease.  We watch him educate himself through books and failed experiments as he tries to find the answers to the problem that surrounds him.  Yet all the while, he continues his daytime raids to exterminate those who hunt him.

Finally, after three years of loneliness he meets a woman who can walk in the daylight.  Out of desperation he tries to make friends while inadvertently frightening her.  Robert brings her to his home, against her will but slowly wins her over.  It is an interesting scene watching him trying to remember how to act like a civilized person after three years of no contact with someone who wasn't trying to kill him.

In the end we learn the truth, that the woman he met, named Ruth is infected.  But the germ has mutated in her and others, so that they can control the bloodlust and can walk in daylight for short amounts of time.  And like Robert, they seek to put down the more violent feral creatures that hunt him.  But they also seek his destruction as well.  For he has unwittingly killed a number of them during his daylight raids, including the husband of Ruth.  But she has come to know him and understands his mistake and forgives him.  She even warns him of what is to come down the road, and urges him to move away and go into hiding.

But Robert refuses and a year later, the members of the new society, come and rid him of those who seek to destroy him.  They also take him into custody and prepare for his execution.  Due to his resisting capture, Robert has become fatally injured but is being kept alive for his public demise.  For now he has become to the boogeyman.  The thing who stalks these people in the day, when they have to avoid the sunlight.  He is the monster to them and he knows it.  He is now the creature of legend, in this new society and accepts the fate that awaits him.

Although it is a sad ending, the book is a powerful study in struggling with loss, loneliness, depression, survival and finally, realization.  Written in 1954, this is one of those timeless novels that I thoroughly recommend to all lovers of science fiction, horror, and fantasy.  It is a thought provoking work that will make you think for years to come.