My Review of Stephen King's "From A Buick 8" 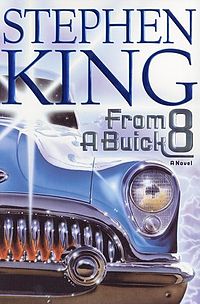 "From A Buick 8" was one of the first books I read by Mr. King after many years of taking a pass on his work.  His novel "Misery" had gone to places I found too intense and terrifying because the only monster in that piece had been human.  There were no safety-barriers of the supernatural involved, just madness, obsession and torture.

Yet something about this novel beckoned and I plunged into his world once more and I'm glad it did.  The story covers a 25 year period in the lives of a group of state troopers who act as 'guardians' over a strange Buick Roadster abandoned at a gas station back in 1979 by a mysterious 'man in black' who wandered off and was never seen again.

The vehicle seems to be like any other car... or so you would think at first glance.  Then you'd notice little things like how the overall look of the vehicle seems normal, but then you notice little touches that don't quite add up.  For one thing there's no keys to start it up.  The dashboard is a bit off too, like someone created a prop for a movie.  But the car is not a Hollywood prop, it's something much more sinister.

People die around this vehicle, and sometimes 'things' come out of it when you least expect it.  Things that are not of this world and don't belong among us.

Mr. King weaves this tale from the different points of view by letting the various troopers in the story  share an experience they've had or witnessed over the last 25 years as they've stood watched over the sinister vehicle, in an attempt to contain the Buick's sinister powers.  This a is a true classic, with many unexpected turns and moments of sheer terror Mr. King is so well-known for.

A great read, especially at this time of year when Halloween is only a month or so away.
book review classic From A Buick 8 multiple points of view sinister vehicle state troopers Stephen King twists and turns